If you’re going to learn how to ski skate and cross-country ski, learn from the expert.

An Olympic Biathlete in the 1980 Olympic Games in Lake Placid, Jobe is highly respected as one of North America’s leading experts on cross-country skiing technique, particularly classic skiing. 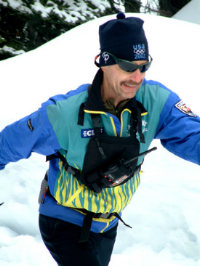 Glenn’s coaching for masters skiers is focused on efficiency and “skiing smarter, not harder” which is key for many masters. Glenn began cross-country skiing in 1972 at the University of Nevada, Reno and was the founder of both Kirkwood and Tahoe Donner’s Nordic centers. Glenn started coaching Far West Junior skiers in 1977 with the Junior National trip to Deadwood South Dakota. He has been instrumental in growing the Far West Junior Nordic Program and is a member of Far West Nordic’s coaches and senior committees.

Tahoe Cross County Ski Center offers a meticulously groomed 65 kilometer trail system. Nineteen separate trails lead skiers and snowshoers through beautiful Ponderosa Pine and White Fir forest, into open meadows, and up to stunning views of Lake Tahoe and its surrounding peaks. 2 trailside warming huts provide ideal locations for getting out of the weather, enjoying a break and a free hot chocolate or tea. 8 kilometers of dog friendly trails allow families to include the entire family during their visit to the snow for healthy outdoor recreation.