From the Washoe to the pioneering families of Nathan Gilmore, Lucky Baldwin, and William Price, to the artists, academics, and craftsmen of the early community, Fallen Leaf Lake drew people to its natural beauty who left a legacy in stories, legends, and land.

Including author Janet Beales Kaidantzis, who has released Fallen Leaf, A Lake and Its People 1850-1950. […] 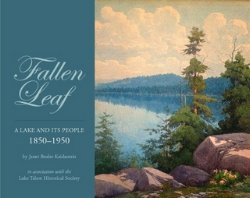 In Fallen Leaf Lake: A Lake and its People 1850–1950, you’ll find out who built Fallen Leaf Lake’s trails and named the lakes in Desolation Wilderness, what the feud between Gilmore and Baldwin was about, and why Fallen Leaf Lake was the starting point for preservation efforts throughout the Lake Tahoe Basin and the origin of the National Parks Interpretive Program.