RedBull – Lebanon
David Lama
Baatara Gorge Climb David Lama, on his first ascent of Avataara (5.14d). In addition to being an art and a sport, climbing is also a lifestyle–one that takes you on crazy adventures to far-flung locations such as the Bataara Gorge, in northern Lebanon. […] 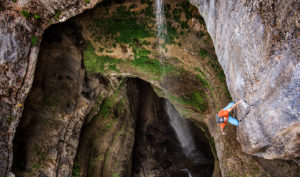