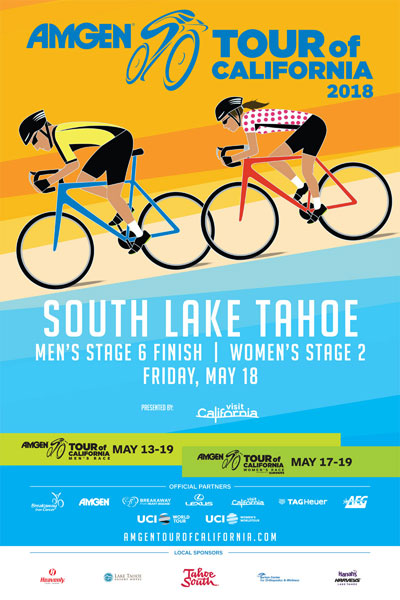 Amgen Tour of California, presented by AEG, the world’s leading sports and live entertainment company, announced the 13th edition of America’s premier cycling stage race will return to South Lake Tahoe. Stage 2 of the Amgen Tour of California Women’s Race Empowered with SRAM and the Men’s Stage 6 finish from Folsom to South Lake Tahoe will take place at Heavenly Mountain Resort, May 18, 2018. Both competitions will conclude in Sacramento, May 19.

The world’s best male cyclists will contest 600+ miles of roadways, highways, and coastlines from Long Beach to Sacramento. The 2018 edition will mark the third time in race history that the peloton will travel the Golden State from south to north.

The Amgen Tour of California Women’s Race empowered with SRAM, showcasing the top female athletes, will run concurrently May 17-19, covering upward of 150 miles over three stages.

The annual professional cycling events carry the distinction of being the only U.S. races on the UCI WorldTour calendar and attract some of the most renowned cyclists and teams in the world. With seven new courses between them, this is the 11th consecutive year the event has featured an international platform for both men’s and women’s racing.

“These elite athletes serve as an inspiration to our community, young athletes and visitors while generating significant national and international media exposure year after year,” said Carol Chaplin, president, and CEO of the Lake Tahoe Visitors Authority. “Tahoe South and our partners look forward to showcasing our home to cycling competitors and recreational enthusiasts as a ‘must-experience’ destination.”

Where to watch and key intersections