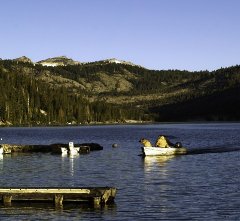 Echo Lakes are a glacially formed pair of lakes, cradled in a serene granite setting 10 miles southwest of Lake Tahoe virtually hidden at 7,252′.

Upper and Lower Echo Lakes are connected by a narrow channel which is passable by boat only during high-water conditions which can cut down your hiking time into Desolation Wilderness along the joint Tahoe Rim Trail/Pacific Crest Trail.

To keep the waters pristine, you must be a Tahoe Keeper if you plan to paddle or boat on the lake.  Clean, Drain, and Dry to prevent aquatic invasive species.

Besides being a favorite spot for artists and hikers, the Echo Summit area has been the site of several significant historical events that have shaped our distinct mountain culture as well as the expansion of California and Nevada history.  Echo Summit was even part of the Lincoln Highway and a major training venue for the 1968 Olympic Summer Games. 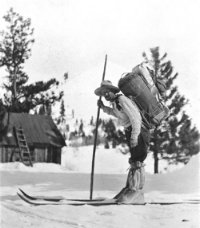 Bisecting the Sierra Nevada mountains, Echo Summit was a major distribution route for delivering the mail, starting with John Calhoun Johnson and followed by one of Lake Tahoe’s most famous mountaineers, Snowshoe Thompson, who is considered the father of California skiing.

Between 1856 and 1876, Snowshoe Thompson delivered mail on skis following the “Johnson’s Cutoff”, between Placerville, California and Genoa, Nevada and later Virginia City, Nevada when he delivered the first silver ore to be mined from the Comstock Lode. Later he taught others how to make skis, as well as the basics of their use. Despite his twenty years of service, he was never paid for delivering the mail.

Wagon trains rolled up and down Osgood’s Grade and played a significant role in the Comstock Lode with the discovery of silver in 1858 in Virginia City, NV. An opportunist, Nehemiah Osgood arrived in South Lake Tahoe from New Hampshire in 1859 and built and operated a toll house at the foot of Meyers Grade (Osgood’s Grade) where Echo Creek flows into the Upper Truckee to collect money for road maintenance.

The road was busy in both directions with coaches, freight schooners, bullion wagons, carrying the tides of prospectors eastward to the Comstock Lode, and Pony Express riders who delivered the mail on the famous route between 1860-1861. The typical toll was 5 cents per animal and 6 bits for men and their wagons. Traffic dropped off considerably with the completion of the railroad over Donner Summit in 1868. Osgood’s Toll House was finally abandoned in 1898 when toll houses were phased out. 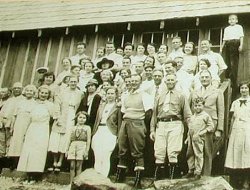 The Celio family, who operated a lumber mill and ran the Yank’s Station complex at the same time, rescued the toll house and moved it to their ranch where it was used for storage for over 50 years. In 1974, the Lake Tahoe Historical Society was instrumental in moving the toll house onto public land on Highway 50 at Rufus Allen Blvd. In 1991, Nehemiah Osgood’s Toll House reached its final home next to the museum and log cabin in the middle of South Lake Tahoe.

Since then, many local and second homeowners built cabins along Echo Summit and along the shoreline of the two Echo Lakes.  The Berkeley Echo Lake Camp has been a popular summer camp since 1922.

In 1968, the U.S. Olympic Planning Commission chose Echo Summit over three other sites for the 1968 Olympic trials. 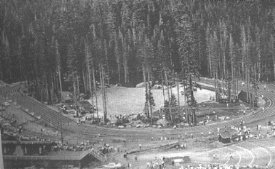 In order to adequately prepare the U.S. team for the Summer Games in Mexico City, the City of South Lake Tahoe built a track at 7,377 feet at the parking lot of Echo Summit Ski Area. The 400-meter oval track was nearly identical to the track in Mexico City and did well for the American Olympians who set 6 world records and won 24 medals – including 12 golds.

Today, Echo Lakes is a prime location for plein air outings by artists, as well as hikers. Echo Summit is one of the best entry points into Desolation Wilderness to the north, and Meiss Meadows to the south along the joint Tahoe Rim Trail/ Pacific Crest National Scenic Trail. And, in the summer hikers can cut down their hiking time into Desolation Wilderness by using the taxi boat service at the marina to reach the trail at the far end of the upper lake.