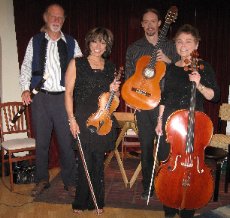 The Dream Spirit Baroque Band has been together for over a decade and is comprised of four local musicians including Jack Shipley on hammer dulcimer and recorder, Jon Smart on guitar, Suzanne Stone on cello, and Diana Woodbury on violin.

Stone’s musical career began with piano at age four. She is a founding m

ember of Sierra Strings of Tahoe, performing at Tahoe for 20 years. She was a nominee for an Eddie Award given by the El Dorado County Arts Council, recognizing her musical contributions to the community.

Woodbury started playing violin at age eight. She studied with Zaven Melikian, concert master of the San Francisco Symphony, and was concert mistress of the Mills College Chamber Orchestra. She put the violin aside for many years while she danced professionally all over the world. Influenced by Suzanne Stone, she picked up the violin again to play with Sierra Strings of Tahoe.