Climbing legend Fred Beckey – and friend of Lake Tahoe, will be the star Saturday, Jan. 6, in a feature film shown at MontBleu starting at 7 pm. […]

Read More… from Dirtbag The Life of Fred Beckey Jan 6 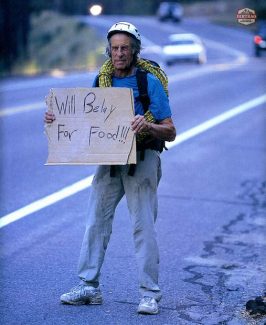 Fred Beckey is the original American “Dirtbag” climber whose name has evoked mystery, adulation and vitriol since the 1940s. Beckey’s stubborn, singular quest to conquer peaks meant a solitary life on the road, where he left a long trail of scorned climbing partners and lost lovers in his wake. The groundbreaking life story of this rebel athlete, who inspired generations of climbers to head for the mountains with his monumental first ascents and eloquent books, is told for the first time in this exclusive documentary film.

Hailed as one of the most prolific, influential climbers of all time, Fred Beckey’s adventures began in Washington’s North Cascade range with his brother Helmy in the 1930s. In 1942, the Beckey brothers cemented their place in climbing lore when the teenagers survived an incredible second ascent of Mount Waddington––considered the most difficult climb in North America at the time. This success marked the beginning of Fred’s epic tear of first ascents around the world, during which he became the consummate “Dirtbag” climber: defined as one who forgoes the pursuit of material comforts and defies societal norms in order to pursue a nomadic mountaineering lifestyle.

Through the 1950s and 1960s, Fred’s accomplishments exceeded anyone in the sport. He shattered records with an unparalleled string of superhuman first ascents, bushwhacking trails and pioneering direct routes thought previously impassable. He eschewed fame, sponsors, family life and the politics of the sport so that his only obligation would remain conquering the next summit. Fred’s individualistic attitude led to him being passed over when the first American team was formed to summit Mount Everest in 1963, but the exclusion only drove Beckey to seek more summits, as he continues climbing to this day.

Still obsessed with the mountains and planning ambitious expeditions at age 94, the man who once bounded up granite and ice with graceful elegance and ease becomes challenged with the simplicity of everyday life. Fred slowed physically in his 90s, but his zeal for the outdoors never waned, and he continued steadfastly plotting new routes up undiscovered ranges for the next generation of climbers and explorers.

Director Dave O’Leske spent the past decade filming Fred Beckey with unprecedented access, getting to know the mythical man in the mountains of China, across North America and in his Pacific Northwest home. O’Leske partnered with a crew of award-winning filmmakers––Producers Jason Reid, Andy McDonough, Colin Harper Plank and Adam Brown, Exec. Producer Colin Baxter and Editor Darren Lund––whose past credits include the hit climbing documentary K2: SIREN OF THE HIMALAYAS (2012), the Webby Award-winning SONICSGATE: REQUIEM FOR A TEAM (2009), the Emmy® Award-winning MAN ZOU: BEIJING TO SHANGHAI (2010) and the narrative drama EDEN (2013), which won Audience Awards for Best Narrative at SXSW and the Milan International Film Festival.

Animations of Fred’s personal journals, guidebooks and photographs will combine with breathtaking aerial photography, motion graphics and rare archival footage to weave together the tapestry of this complex man’s life. More than 30 additional interviews with some of the world’s greatest climbers––including Yvon Chouinard, Layton Kor, Conrad Anker, Royal Robbins, Reinhold Messner and Jim Whittaker––attest to Fred Beckey’s legendary stature and iconic impact on the alpine world.

For more information visit dirtbagmovie.com and tickets are available at montbleuresort.com/events.