Home » Blog » Made in Tahoe » Did you know…Truckee has a Farm? Meet The Shaws.

Did you know…Truckee has a Farm? Meet The Shaws. 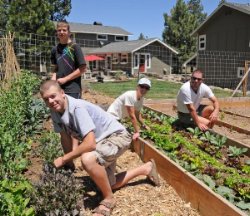 This article is a reprint from the Print Edition of Moonshine Ink, the Independent News Source for Truckee and North Lake Tahoe.

It was a book that changed the life of the Shaw family.

Upon the recommendation of a cousin in Berkeley, the family of five got Michael Pollan’s “Omnivore’s Dilemma,” the seminal book about America’s food culture, on audio tape and listened to it whenever they were in the car.

Each family member was profoundly affected by what they heard. The youngest son Gage, then a seventh grader at Alder Creek Middle School, wrote an essay about industrial corn; Hayden, now 14, used a similar topic as the subject of his persuasion debate for his speech and debate class; and Barbara and John Shaw decided to start their own farm – in Truckee.

“We felt we needed to grow some clean food for us to eat, and we knew we could do it,” Barbara said. “The real question was: Could we do it here?” The answer, it turns out, is yes.

Started this past spring, Shaw Family Farms is probably the largest farm in the Town of Truckee. With 100 animals, four bee colonies, 33 vegetable beds and a large greenhouse spread over their 40-acre Glenshire ranch, the Shaws decided to not just talk about changing the way we grow our food, but to actually do something about it. The family hopes their experimentation in high-altitude, large-scale sustainable farming will inspire others to follow their lead. 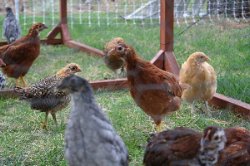 The Shaws are not entirely farming novices. John grew up on a ranch in Reno, and later he and Barbara had a small farm there with a garden, chickens, sheep and the occasional cow. In 1997, the family moved to their current home in Glenshire – a large, flat expanse surrounded by Jeffrey Pines tucked between Highway 80 and the Truckee River – hoping to recreate the wide-open feel of John’s childhood for their three boys (18-year old David is in the U.S. Marine Corps). When the Shaws decided last fall to start their own farm, it took months of planning and reading before they felt ready. In March, work on the farm began.

Over spring break, Gage, Hayden and neighbor Steven Zissimos, 15, built the garden beds, and at the end of April the Shaws hosted a greenhouse raising party. The party was open to the entire community, and around 50 people showed up, most of whom the Shaws didn’t know.

“We really felt the community was ripe for something like this,” Barbara, 42, said. “People were so excited for the opportunity. Some left saying, ‘Thank you so much.’”

The Shaw boys and greenhouse party attendees planted peas, herbs, greens, broccoli, onions, leaks, strawberries, raspberries, asparagus, garlic, carrots, kale and potatoes. In the greenhouse, red buckets hang from the roof with 15 different varieties of tomatoes growing three different ways. The Shaws are constantly experimenting to see what works and what doesn’t.  “Every day is a learning experience,” John, 45, said.

On Aug. 30th, Slow Food Lake Tahoe is holding a tour of Truckee vegetable gardens, including Shaw Family Farms, from 1 to 4 .pm. Two of the gardens also keep chickens. The tour will end at a fourth garden where refreshments will be served. For details, please go to slowfoodlaketahoe.org.

Although the farm is not certified organic, the Shaws use all organic practices and in fact go a step beyond.

“What we are doing is actually better than organic,” Barbara said. “Organic certification has a lot of restrictions on composting that I don’t agree with, like not allowing dairy.” The Shaws make their own thermal compost by combining leftover food from Moody’s Bistro, old produce donated by New Moon Natural Foods and horse manure collected from a friend in Glenshire. Mixed in a bin, the compost self-heats to 140 degrees, killing any “bad” bacteria.

But make no mistake. Growing food in the mountains is challenging, the Shaws say. What makes it more difficult than growing at lower elevations is not the winter temperatures but the summer night-time frosts. According to John, Truckee gets over 300 frost nights a year. In mid-June, for example, Barbara and her two boys spent an hour getting the potato patch covered because of the evening cold. The key, John said, is having a greenhouse, and lots of patience. Because of the cold temperatures, vegetables take longer to grow. Radishes, for instance, usually grow in 28 days. At Shaw Family Farms, they took two months.

“You can do it,” Barbara said about farming in Truckee. “It just takes more time.”

Having a cat also helps. Before the Shaws got their cat Boots, or “Killer” as they like to call him, Barbara said chipmunks were actually the biggest challenge to growing anything.

So far, most of the produce harvested has gone to feeding the Shaw family (“We’ve been eating a lot of salad,” notes Barbara), but Barbara said she expects to have a stand at the Truckee Farmers Market next year.

Because of all the variables involved in growing produce, Barbara feels that raising animals is easier. Currently, the Shaws have several pens filled with chickens (both egg-laying and broilers), turkeys and ducks. Last month, the first set of broilers was butchered (due to town laws, this has to be done off-site at a Sacramento processing plant) and the farm hosted a chicken dinner open to the public. The Shaws already have a list of people signed up for Thanksgiving turkeys and next year would like to include meat or eggs with their CSA.

Except for Zissimos, the Shaw family operates the farm entirely by themselves. Since John also works as a civil engineer, the bulk of the work falls on Barbara, for whom the farm is a full-time job. Gage, 13, is the farm’s official beekeeper, looking after 20,000 bees. (They will eventually have honey for sale.)

Despite the hard work, the Shaws are proud of what they have accomplished in a short time and hope their success will motivate other Truckee residents to grow their own food.

“It makes me feel good to be doing something to help change the food system in the U.S.,” Barbara said. “We’re hoping to encourage people to follow our example.”

Top Photo:  Gage, Hayden, Barb and John Shaw tend to the lettuce bends at their farm.