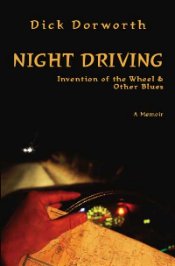 Dick recently published his memoir “Night Driving: Invention Of The Wheel & Other Blues”. A collection of short stories, essays and personal observations.

Early reviews give it high marks as an excellent account of “one man’s personal journey through the backroads and mountain ranges of the world; woven into the history of a wildly experimental, consciousness-expanding era.”

Dorworth grew up in Lake Tahoe and began ski racing in 1949. By 1950, he was Far West champion and renowned as one of the top racers in America. And, in 1963 he held the world speed skiing record at 106.8 miles per hour.

As he roamed the world climbing and skiing throughout the 60’s, he began to write about his experiences that lead to essays about hope, transformation and mind-altering wisdom. Many of his essays and photos have been published in national outdoor publications.

From the Book’s Back Cover:

More than just the travelogues of a world-class skier, legendary climber, and consummate lover of mountains crisscrossing Europe and the Americas; these stories look into the mirror around the early history and development of U.S. ski racing and rock climbing in the wake of W.W. II and through the destructiveness of Vietnam. Rather than palliative tales of youthful antics, escapism and bravado, in that looking glass Dorworth finds the very soul of America and our society. And he doesn’t always like what he sees.

By searching the depths of his own nature and allowing it to be changed by his experiences, Night Driving bears witness that out of a mind-bending era of drugs, drink, and crazy responses to a crazed world, it’s possible to find not only redemption but a deeply creative wisdom.

Dorworth’s keen observations, filled with admirable honesty, irony and humor (many put down more than 40 years ago), are today, sadly, a powerful portent of a world that remains full of questionable government, environmental annihilation and senseless war.

Yet unlike many, then and now, who turn on, tune in and drop out, Dorworth’s reaction is to embrace “the staggering chore… using whatever tools and talents we have to breath life into the machine; to add humanity to the robot.”

Night Driving is available through First Ascent Press. Click here to order the book and to learn more.