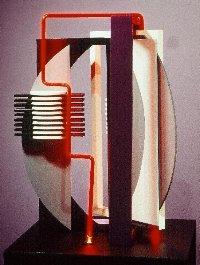 Her sculptures are constructions that relate to architecture.

“Structural forms have always fascinated me,” says Elaine Jason of Tahoe City, “whether they are structures in nature, such as the cellular forms of butterfly wings as seen through a microscope…or the architectural things that man has made.”

Elaine Jason received a bachelor’s degree in Fine Art in 1966 at the Chouinard Art Institute in Los Angeles, California. As a native Californian she has exhibited her work in numerous prestigious galleries in Los Angeles, San Francisco, Santa Barbara and San Diego along with many museum exhibitions. A 10 year retrospective solo exhibition of her neon work was held at the Museum of Neon Art in Los Angeles in 1998.

Along with her solo exhibitions and gallery representation in California she has also exhibited in Arizona and Chicago.

“My life revolves around the art world. Exhibiting my own mixed media sculptures and visiting galleries and museums, and being alone in my studio creating new works.” – Elaine Jason

Jason’s unique use of wood, found objects and the architectural nature of her work has lead to many commissions including Lockheed Martin, Countrywide, and Home Federal Savings and Loan. Her works are included in numerous public and private collections throughout the United States, Mexico and Europe. 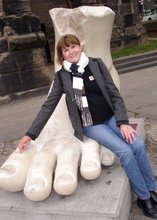 Jason left Los Angeles for the Lake Tahoe area in 1982. Her studio for the past several years has been in her home in Tahoe City. She has been invited to give workshops at Sierra Nevada College, Incline Village and has also taught sculpture, color theory and design at Truckee Meadows Community College in Reno.

To view more of her sculptural constructions, click here.

“While growing up in Post World War II L.A. I watched the growth of an entire city, or cities within cities connected by freeways. Farmlands and orange groves were destroyed to make room for tract homes and shopping centers. It was the beginning of my love/hate relationship with architecture,” says Jason.