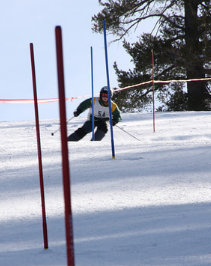 Since 1979 adult volunteers have been teaching young skiers side by side through the Buddy Werner Youth Ski League.

Besides being loads of fun, it’s a great way to get your parents out on the slopes every Sunday at Sierra-at-Tahoe.  Many of the adult volunteers today were graduates of Buddy Werner themselves, so they understand how much fun it is.

Grab your parents and go!

The Buddy Werner Youth Ski League is an all-volunteer not-for-profit corporation providing ski race training and ski race participation to the youth of South Lake Tahoe and Western El Dorado County. The focus is on slalom racing, but those skills make participants able to ski better under all conditions. There are “developmental” and “Race” teams so kids are paired with others of similar ability and interest. Fun is stressed over hard core competition and allow kids to pair up with friends and to request specific coaches. Virtually every successful High School racer started with a Buddy Werner program.

Requirements:  Skiers must be between age seven (7) and fourteen (14), but not beyond 8th grade, as of December 10, 2012. Skiers must have basic skiing ability; able to stop, turn left, turn right, and be able to independently load and unload from the ski lift. Skiers must be responsible for their own equipment and clothing, and provide for their transportation to and from ski practices and races held on Sundays at the Sierra-At-Tahoe Resort on US 50 west of Echo Summit. Participants must be signed in and out daily by a parent or guardian.

Who was Buddy Werner?

Buddy Werner, a native of Steamboat Springs, Colorado started out his skiing career as a ski jumper, winning his first Regional Championship at the age of 10. Buddy soon decided to focus his attention on Alpine skiing during his younger years. This decision would take Buddy Werner from a local hometown skier to an international icon, and one of the greatest skiing legends there ever was.

Buddy was a three-time member of the United States Olympic Team and a 2-time member of the United States Federation Internationale De Ski Team. Buddy made the international ski competition circuit as a member of FIS at the age of 18. Two years later, he made his first Olympic appearance at the 1956 Winter Games in Cortina d’Ampezzo, Italy. He also competed in the FIS games in Austria in 1958. Although Buddy was a team member for the 1960 Olympic winter games just up the road in Squaw Valley, California, a broken leg suffered eight weeks earlier would keep him from competing. But just four years later, Buddy would again secure his place on the Olympic Team and competed in Innsbruck, Austria for the United States.

Buddy was favored to win in those 1964 Olympics, but as it would happen, he crashed during his race. At the time, the US Men’s Alpine Team had not won a medal for their country. Buddy’s hopes to become the first had been crushed during that final attempt. However, when his teammates, Billy Kidd and Jimmie Huega, who were both considered longshots to medal, clinched second and third place to capture the first two medals for the US Team, Buddy leaped into the finish arena and threw his arms around them. His enthusiasm and sportsmanship were impossible to deny. This, it is said, was typical of Buddy’s attitude.

Perhaps the most famous of Buddy’s numerous accomplishments was the stunning victory at the 1959 Hahnenkamm race in Kitsbuehel, Austria. Buddy was the first American skier to ever win the most notorious event in ski racing history. His history-making victory, on the most dangerous downhill course on the World Cup circuit, had not been repeated by a US skier for 44 years, when Daron Rahlves won the prestigious race in 2003.

On April 12, 1964, Buddy was in the Swiss Alps skiing in a television documentary when an avalanche struck. Buddy tried to outrace the thundering snow, but to no avail. Buddy did not survive and the world lost one if it’s most enigmatic, dedicated sportsman. Buddy always gave 110 percent. People said he would finish first or last because he gave it his all. Locals tell of a young man who, even at the height of his fame, would always come out to ski with the local kids.

After Buddy’s untimely death, the councilmen of Steamboat Springs unanimously voted to rename the town’s ski mountain from “Storm Mountain” to “Mt. Werner”, in honor of their beloved hero and friend. The US Department of the Interior approved of the renaming, and the dedication ceremony took place in 1965. Buddy was posthumously inducted into the National Ski Hall of Fame in 1964.

Today, you can ski Mt Vernon, just as Buddy did and you can also visit the Bud Werner Memorial Library in Steamboat Springs. Truly the best way to experience a little Buddy Werner magic is to ski your heart out and cheer on your teammates in our Buddy Werner Youth Ski League. The League encourages our young skiers to emulate the values, work ethic, and sportsmanship demonstrated by the late, great Buddy Werner.