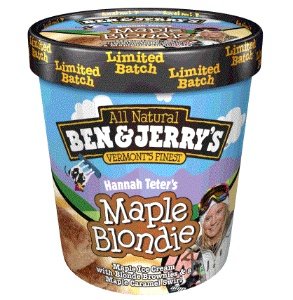 It is the first flavor created for an athlete by the company.

As part of Ben & Jerry’s social mission, a portion of the ice cream sales will benefit Hannah’s Gold, Teter’s charity that funds various projects in Kenya.

Made of rich and creamy maple ice cream with blonde brownie chunks and a maple caramel swirl, Hannah’s Maple Blondie can be found nationwide at B&J Scoop Shops and grocery stores for a limited time only.

Besides her Vermont roots, Hannah was chosen for being a positive young role model for giving back to others less fortunate through her enterprise, Hannah’s Gold. In 2006 she created Hannah’s Gold, a Vermont maple syrup company that donates 100% of its profits to funding infrastructure and humanitarian needs in the African village of Kirindon in Kenya.  To bolster the syrup profits, she also sells cotton/organic “Goodness” sweatbands and has donated all of her contest winnings to fund the ongoing projects in Kenya.

“We couldn’t think of a better athlete or humanitarian to honor with a flavor this year,” said Walt Freese, Chief Euphoria Officer of Ben & Jerry’s. “Hannah’s not only a Vermont star, but making a big impact on countless people in Kirindon that desperately need humanitarian help. We’ll be cheering her on as she competes this winter and as she continues her important work in Africa.” 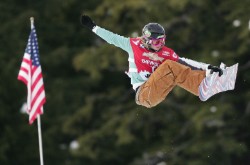 Hannah grew up snowboarding in Vermont, and currently rides for Sierra-at-Tahoe in South Lake Tahoe.  A gifted athlete, Hannah has many accomplishments under her belt.  She won the Gold Medal in 2006 for the Women’s Halfpipe in Torino, Italy, won three times at the 2005 X Games, and was nominated for three ESPY awards.

“I’m so amped to have my very own Ben & Jerry’s flavor,” said Hannah. “It’s great to have support from my home state, and a cool way to further support Hannah’s Gold and all the work we’re doing in Kirindon, Kenya.” Teter

For the past three years Hannah has helped support Kirindon with numerous projects including paying for school fees, providing farming tools, purchasing home base care kits for HIV patients, purchasing bicycles and much more. Now, she’s committed to bringing safe drinking water and a sanitation system to the children of Kirindon, and you can help. 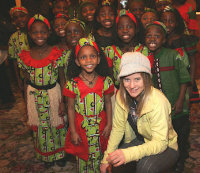 Find out more about Hannah Teter and Hannah’s Gold at hannahsgold.com, and consider making a donation or purchasing some syrup or sweatbands.  And, look for the Maple Blondie at your favorite grocery store soon.

Thanks for Keepin’ it Real Hannah!