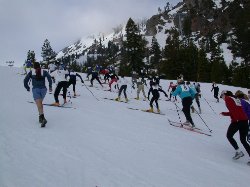 Each spring hundreds of Nordic skiers, snow shoers, and runners race up the mountain run in the Annual Billy Dutton Uphill, in honor of late local luminary, Billy Dutton.

Sunday, April 10th, marks the Annual Billy Dutton Uphill at Squaw Valley starting at 8am at the base of KT-22.

The original “run what ya brung” uphill race is an uphill answer to the famous ‘Chinese Downhill’ of the 1970s. Starting from the bottom of KT-22, the course climbs 2,000 vertical feet over 3.2 miles to the finish at High Camp, el. 8200′.

The Billy Dutton Uphill race is open to Nordic skiers, snowshoers, runners and outdoor enthusiasts of all ages. Registration begins at 7am outside of Dave’s Deli.

Registration varies with all proceeds benefit the Far West Nordic Junior Program. Prizes are awarded to the top finishers in all age categories. Awards and party follow, so check out all the details at www.farwestnordic.org/billydutton.html 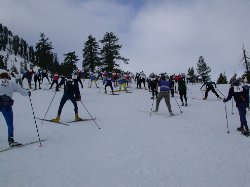 The always smiling Billy Dutton helped establish the Tahoe Nordic Search and Rescue (TNSR) in 1976, based on his passion for cross country skiing and his vast knowledge of the Tahoe Basin and the surrounding backcountry. “Bill was our strongest skier. I was always sure to be with the likes of him when we teamed up on searches,” says Doug Read, Dutton friend and fellow original member of TNSR.

Read recounts the time when Dutton herringboned eight miles up and out of a canyon near Diamond Crossing, carrying a hurt woman on his back to safety and recovery. “All he asked was if I would carry his poles,” recalls Read. “He was the type who made our community such a wonderful place to live.” It has been two decades since Billy Dutton passed away, but his spirit lives on through the Annual Billy Dutton Uphill, and through his wife, children, and grandchildren. 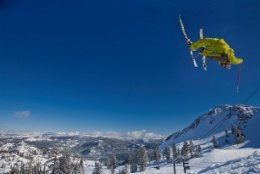 Dutton’s nephew, Timmy Dutton, hit the Freeskiing scene by storm, in true family fashion. Like Billy, Tim is known for his smile and skiing prowess.

Dutton was a pro skier who competed at the Freeride World Tour for three years. Dutton was the North American Freeskiing Champion in 2009. He was also filmed in several movies and commercials where skiing or skydiving was featured.

Tragically, Timmy died in a skydiving accident in 2014.

Another reason to get out and run…and never waste a day.