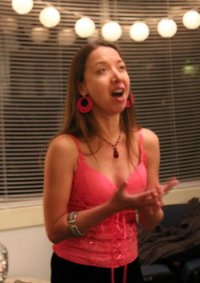 Strong yet delicate, Anna tells classic stories of romance, struggle, suffering and triumph with her hypnotic voice.  Listening to Anna gives us one more reason to sing our praises of Tahoe’s eclectic art and culture scene.

Meet Anna Helwing, soprano vocalist.  Classically trained, Anna enchants the audience either as a soloist or backed by TOCCATA that accentuates her notes with dramatic dimension.

Anna resides in South Lake Tahoe where she teaches piano and voice courses in Lake Tahoe Community College, and works as a music director and organist for two churches.  Anna also sings with TOCCATA – The Orchestra and Community Choral Artists of the Tahoe Area.

Anna Hewkubg, soprano, came to California in 2002 from Wroclaw, Poland where she earned her B.A. and M.A. in English and American Literature (Wroclaw University, 1999). At the same time, she trained on the piano, and voice – the first at a state music school, and the latter in Technical University Choir of Wroclaw. Between 1989 and 2001, she toured extensively with the choir in over 20 countries.

Anna also graduated from the Wroclaw School of Organ (1995). In May 2008 she received a master’s degree in vocal performance at University of Nevada, Reno, where she studied with Dr Katharine DeBoer. Recently she performed in Germany and Poland, including the International Summer Academy of Early Music in Warsaw. Her solo performances have included Regina Coeli K.128 and Requiem by Mozart, selected songs by Chopin, St. Matthew’s Passion by J.S. Bach, Messiah by Handel, and a role of Amahl in Amahl and Night Visitors by G.C.Menotti.