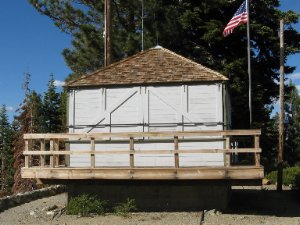 The original Angora Fire Lookout was built in 1924, and was later converted into a small residence.  In 1935, the Civilian Conservation Corps built the current lookout structure. The garage next to the road was built sometime during the 1940s.

The Angora Fire Lookout has been relatively well maintained and provides spectacular views of Fallen Leaf Lake, Mount Tallac, Lake Tahoe and Desolation Wilderness to the north and east, and Round Top, Elephant’s Back, Carson Pass, Echo Summit and all points in between to the South. 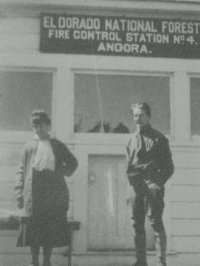 Today, the Angora Fire Lookout is managed by the Lake Tahoe Basin Management Unit. It is unique in that all three lookout ground houses built there over the years have been maintained and retain their original designs.  The lookout is a popular destination for bicyclists.

Being a residence for fire watchers, we’re sure there is a lot of history connected to this lookout.