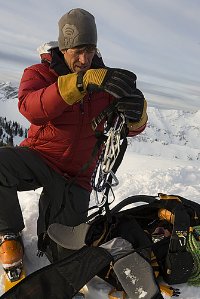 His passion for ski mountaineering was cause for being voted as one of the “Greatest Skiers of Our Time” by Powder Magazine and a featured segment in the Sony Classic Pictures film entitled “Steep.”

Andrew McLean has been pursuing steep skiing challenges in remote locations for over two decades and has accumulated over 100 first descents.  He’ll be the featured speaker at the AlpenGlow Sports Winter Films event on December 8, 2011.

World-famous ski mountaineer Andrew McLean will present, “Norway’s Wild West” on December 8th at 7pm at the Sawtooth Ridge Café in Tahoe City, California. Join Salt Lake City and ski mountaineering icon Andrew McLean for a three-part trip to Norway’s Spitsbergen archipelago. Situated in the Arctic Circle, the area provides world-class skiing, trekking, sailing and adventure.  McLean’s specialty is ski mountaineering, which involves climbing up peaks before skiing down them. This process allows him to ski mountains where motorized access is forbidden or impractical.

Outside of skiing, McLean’s interests include design, writing and photography. After graduating from the Rhode Island School of Design, he worked at Black Diamond Equipment for thirteen years, creating products such as the Camalot, wire gate carabiners, Whippet, Peckers and Talon rock hook. His writings and photography have appeared in Skiing, Powder, Backcountry Magazine and numerous outdoor gear catalogs. He lives in Park City, Utah with his wife Polly who holds the world record for the greatest amount of vertical climbed and skied in 24 hours. They have a daughter named Mira, one good dog and one bad dog.