“A Wall of White” by Jennifer Woodlief

It’s one of the most amazing survival stories ever told.

In 1982, an avalanche at Alpine Meadows ski resort took the lives of seven people. In the middle of the devastation, one woman was trapped under the snow and a team of ski patrolmen worked for five days to free her. Jennifer Woodlief tells the story in a vivid and compelling style in her book “A Wall of White”. […]

Read More… from “A Wall of White” by Jennifer Woodlief 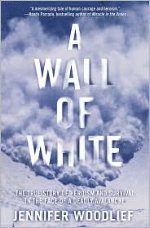 Jennifer Woodlief is a former reporter for Sports Illustrated. A graduate of Stanford University and the UCLA School of Law, she has prosecuted first-degree murder cases and worked as a case officer for the CIA. Her first book, Ski to Die: The Bill Johnson Story, was optioned by Warner Bros. for a movie.

About A Wall of White

On the morning of March 31, 1982, the snow had already been falling at a record rate for four days at Alpine Meadows ski resort near Lake Tahoe, California. For the vacationers and employees at the resort, this day would change their lives forever.

The unprecedented avalanche that day at Alpine Meadows was a once-in-a-lifetime catastrophe. Much like the nor”easter that bedeviled the fishermen in Sebastian Junger”s The Perfect Storm, an unforeseeable confluence of natural events created the conditions for an unimaginable disaster — and, in one woman”s case, an astonishing ordeal of survival.

Jennifer Woodlief movingly tells the story of the massive slab avalanche that killed seven and left one victim buried alive under the snow. In this freak event, millions of tons of snow roared into the ski area and beyond, engulfing unsuspecting vacationers as well as resort employees working in spite of the danger.

At the center of this wrenching tale of nature’s fury are ski patrolman Larry Heywood and his team, who heroically fought with the help of a search-and-rescue dog to save a twenty-two-year-old woman trapped for five days underneath the suffocating snow — a tale of survival that is itself an exploration of the capacity of courage.

Written with all the suspense of a thriller, A Wall of White is an inspiring story of a group of strangers brought together by an inconceivable calamity — a testament to the unwavering dedication of a band of rebel rescuers, driven only by a commitment to saving lives, battling not just extreme conditions but seemingly impossible odds.